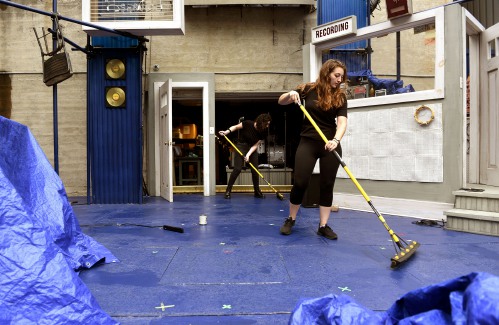 WHITE RIVER JUNCTION – In March, not everyone associated with Northern Stage thought it was possible to turn a dusty quadrangle behind its building into an open-air theater.

The land, partly gravel and partly paved, housed garbage cans and a few trucks and bore a layer of gray snow.

“I was kind of like, ‘I can’t see it. I’m sorry, but I can’t see it, ”said Ryan Klink, then only six months into his role as director of sales and marketing for the non-profit theater company.

But others saw that a stage and seats would fit between the wing that houses the Northern Stage stage store and the company’s new theater.

The Courtyard Theater opened in June and has since served as a lifeline for theatergoers.

Almost all of the Upper Valley theater companies have moved away for the summer. Even as restrictions on indoor gatherings relaxed, the uncertainty of the coronavirus pandemic has made flexibility essential. Some of these outdoor accommodations are likely to survive the pandemic.

Northern Stage has not set its season for 2022-2023, but barring any surprises, the Courtyard will reopen next summer.

“I think there is a future for the Courtyard beyond this year,” said Irene Green, general manager of the company, on Tuesday.

This summer, Northern Stage produced three outdoor shows: The Complete Works of William Shakespeare (Abridged), a Shakespeare production A Midsummer Night’s dream by students of the company’s Shakespeare Intensive Summer Program, and Million Dollar Quartet, a musical, which is in production until September 12.

Each production faced different seating and social distancing restrictions. In June, around 70 customers could sit in pods according to a seating plan the company re-established each evening, Klink said.

In July, the public could sit in rows, but spaced apart. Current seating is more traditional, with rows of green plastic chairs side by side and seating for 235 people.

While the Courtyard has enabled Northern Stage to produce short term plays, in the longer term it will provide opportunities for summer expansion. Upper Valley art leaders have sought ways to make the region a summer art destination, and the yard fits that mold.

“I think bringing an audience from further afield is definitely in the 10-year plan,” Green said.

She added that the courtyard could be used by other arts organizations and as a venue for civic events, such as graduation ceremonies. And Northern Stage could choose to program in its main theater at the same time, Green said.

The outward appearance of the space is its appeal. Behind the theater is a wooded area, although the Barrette Arts Center is surrounded by a still small but increasingly crowded cityscape.

As Klink and I watched the theater on Tuesday, a few drops of rain fell, and more in the forecast. Opposite, a huge diesel generator on the roof of a neighboring building woke up and released a large cloud of black smoke. A small plane flew over.

As well as providing a summer venue, the theater is a connection to the grain that drew performers to White River Junction 30 years ago. Adapting to the pandemic has brought back some of the spirit of improvisation that was lost amid huge investments in the arts, restoration and housing development in the former railway village.

How it develops, bears watch.

“I think we’ll know a lot more when we officially end this summer season,” said Klink.

“We want to hear from our partners,” Green said. How the Courtyard Theater affected neighbors and downtown will influence how it is used later.

Until then, the shows continue, for the most part. A few dates were weather-canceled and some performances included brief rain delays or started later in the evening to avoid the worst of the heat.

But audiences were thankful for the chance to see a show and be part of the crowd again, Green and Klink said. The company will probably decide by December what will happen next summer.

“I think it’s safe to say we’re going to do something in the yard,” Klink said.

Million Dollar Quartet is in production through September 12 at the Courtyard Theater on Northern Stage. For tickets, go to Northernstage.org or call 802-296-7000.

Richard Thompson is no stranger to the Lebanese Opera, and his return on tour brings him back on August 25 for a solo acoustic performance.

“There’s nothing quite like playing in front of people,” the London-born singer and guitarist in his sweet Scottish brogue said in a telephone interview Wednesday morning.

Thompson, who first rose to prominence as a Fairport Convention songwriter and guitarist in the 1960s, has spent the pandemic writing and recording new tracks, producing two EPs. The next album is written, he says.

He also went through the process of editing a thesis, Old wine, which documents his early career from 1967 to 1975.

“The best thing about this particular time… things are happening for the first time,” he said of those formative years.

His show in Lebanon dates back to this time, until his most recent work. He has affectionate feelings for the opera.

“It’s lovely,” he said. “It’s a nice old venue, and the audience is generally great. It is a beautiful part of the world.

Among the many art exhibitions that I have seen in the Upper Valley, a few stand out. The AVA Gallery and Art Center in Lebanon exhibited paintings from Craftsbury, Vermont, by artist Paul Gruhler in January 2010, and I felt like my eyes had been caught by their backs and woken up.

In last week’s edition of Seven days, Burlington-based alternative weekly Amy Lilly wrote a short profile de Gruhler, who is approaching his 80s and has worked his entire career on flat geometric shapes that play with each other. At their best, his paintings buzz with tension bounded by line, form and color.

If it was a treat to read about him, it will also be a treat to go and see some of his work. The Highland Center for the Arts in Greensboro, Vermont, will host “Harmonics: 60 Years of Life in Art”, until August 29, and performances will begin September 17 at the Vermont Arts Council and the Vermont Supreme Court in Montpellier and the Central Vermont Medical Center gallery in Berlin.