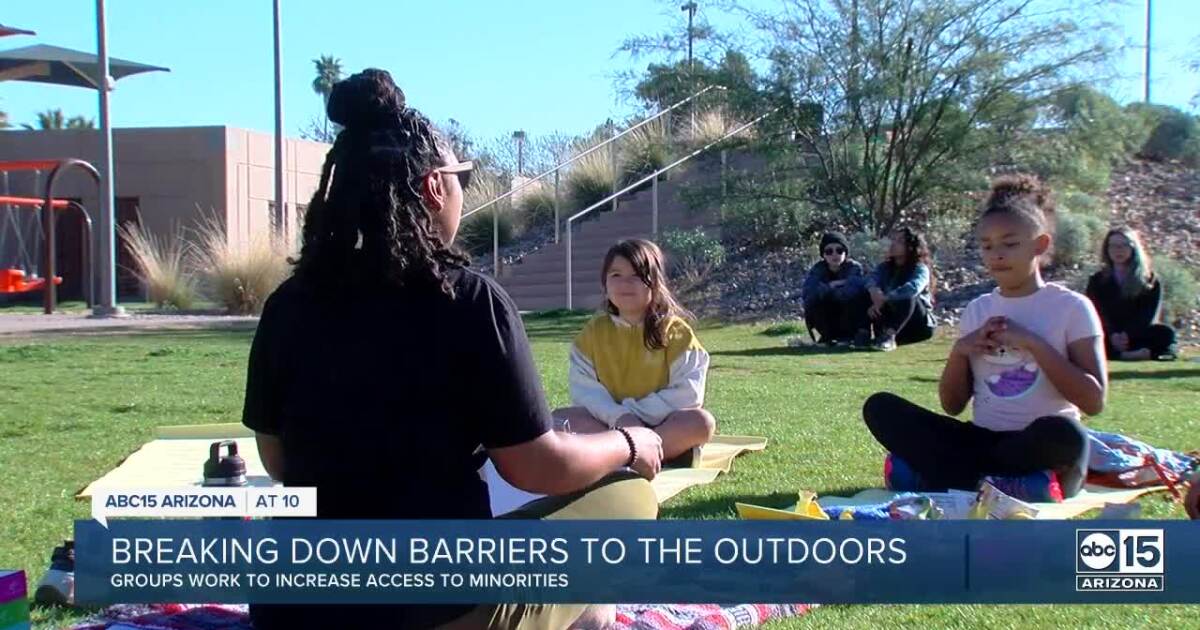 PHOENIX — “Growing up, I had to choose the outdoors over culture or family,” said Raquel Gomez.

As an adult, Gomez now has both.

She exposes black and brown girls, ages 8 to 12, to nature through her organization Atabey Outdoors.

Gomez started the organization in 2020 to open the eyes of young girls in Phoenix to activities like hiking, camping, paddleboarding, mountain biking, outdoor cooking and more across the state.

“We think this age group is the most critical. They absorb information like a sponge. They still want to be independent but are also looking for mentors and advice,” Gomez added.

Chromatic Climbers is another valley organization that helps people of color enjoy the outdoors.

“I can think of maybe five people who are people of color that I had the opportunity to climb with and that was before this organization was founded,” Benjamin Dickens said.

Dickens and Sara Leinenveber launched their organization two years ago.

“We want to create a network of mentorships, as well as clinics, for people who are starting to have that safer place inside to go so they can connect outside,” Leinenveber said.

Dickens’ perspective is very similar to that of Quinton Daniels.

“We’ve only been here a year and I’ve probably experienced about five to six lakes and three mountain ranges,” Daniels said.

Even Daniels says his neighbors are shocked to hear what he’s been through across Arizona.

“I really appreciate the mountains, the air and its quality. People don’t understand that we live in Atlanta or Charlotte, we don’t breathe that air. It’s a totally different kind of tune,” Daniels added.

“It makes me wonder why. But, when you say that, it makes me realize that we don’t meet a lot of people of color in the great outdoors,” Shelley Mullee said.

Professor Lee says he has his convictions.

“In terms of knowledge, experience, skill and perhaps an appreciation of outdoor recreation, this has been passed down to the current generation,” Dr Lee added.

Mullee and her husband were shocked to learn that whites make up 87.4% of park visitors in Arizona. These numbers add up to more than 100% due to the fact that some people select more than one race to represent them.

“It’s really disappointing to hear those numbers because they miss a lot of the fun,” Mullee’s husband said.

Another reason people of color in our community might not enjoy state parks, according to one park spokeswoman, is where they are. The closest park to Phoenix is ​​about 45 minutes from town.

“So it’s more difficult for people to get out and explore. You have to commit to more than an hour’s drive from wherever you are. You have to pack your bags and prepare in advance if you want something that you can necessarily do and is easily impulsive,” said Michelle Thompson, spokeswoman for Arizona State Parks and Trails.

The idea that people of color don’t interact with the outside now seems more fact than opinion.

“I was really excited for someone to think about these things,” added Leinenveber.

This has unexpected benefits for some.

“When I’m climbing, that’s about the only time my head is calm and I’m completely calm,” Dickens added.

The spokesperson for Arizona State Parks and Trails said her agency has partnerships with various groups to gather information, analyze and reassess how things are done when it comes to attracting a diverse group of park visitors.