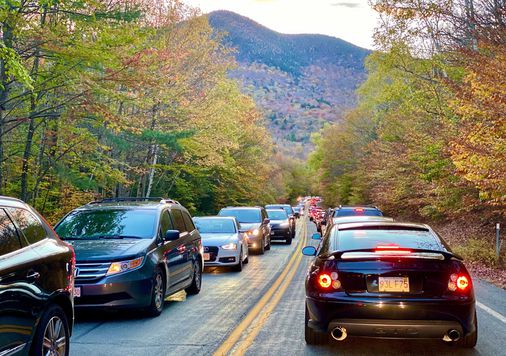 New England’s two national forests saw a 60% increase in visitors as people sought fresh air and open spaces during the summer of 2020 of the COVID-19 pandemic, posing challenges to officials who want to protect the land but also provide recreational experiences for people, University of New Hampshire researchers say.

Ferguson said that for decades, visits to parks and protected areas have been steadily increasing, and so have their impacts. Over the summer, after the COVID pandemic first hit the United States, that steady increase turned into an “extremely dramatic surge.” Most of the new visitors came from out of state.

Conflicts between visitors were a key issue during this tense summer, the researchers found. This included disagreements over perceived violations of COVID-19 safety measures like not wearing masks or maintaining physical distancing. “It’s the conflict between the visitors that has to be managed” above all, Ferguson said.

Ferguson said one solution might be more law enforcement, but a more effective solution would be educating visitors on “proper behavior and decision-making.”

The researchers found that about 10% of visitors said they were unlikely to ever return due to problems they encountered, Ferguson said.

“It’s a very difficult situation right now for these resource managers,” Ferguson said. He said officials had to deal with a large influx of visitors while trying to “manage it all to deliver high-quality experiences”. The search did not cover the summer of 2021.

Ferguson, along with colleagues from the university and the US Forest Service, outlined their findings in a study published in the journal Society and Natural Resources; and two different studies in the Journal of Outdoor Recreation and Tourism. Funding for the research was provided by the Forest Service.

Martin Finucane can be contacted at [email protected]