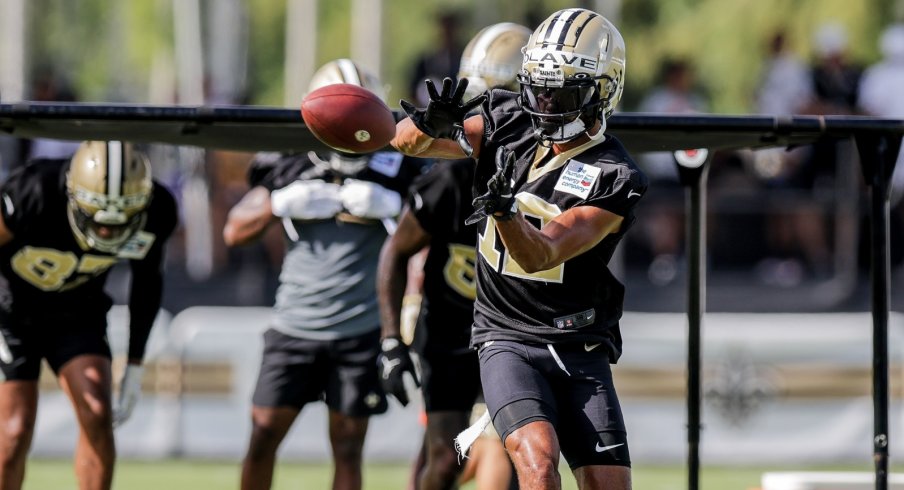 This Week on Twitter is a preview of some of the best and most entertaining tweets of the week from Buckeyeland and beyond.

The start of the Ohio State football season is now officially less than a month away, with this week marking the start of training camp for the last group of Buckeyes to hit the field in Columbus.

Hey, the Buckeyes are back #GoBucks pic.twitter.com/jGhR1Jehrl

Conveniently, the basketball team finally answered CJ Stroud’s call for an inter-squad scrimmage between the gridiron gang and the hoop gang, just as the former’s coaching responsibilities begin to take hold. . Having likely witnessed what Marvin Harrison Jr. brings in his dunk package, Zed Key and Chris Holtmann made sure to time their response by letting Ohio State’s last prospect Heisman know that they are now ready for a confrontation at any time.

@CJ7STRUD I prepared my team Where is your team

Chris Holtmann jokes about CJ Stroud challenging the Ohio State basketball team to a 5-on-5 game against the football team:

We have the most confident QB1 in the country and I love it! pic.twitter.com/edxU8nIqaT

Holtmann gave more than sly compliments this week. He and his wife donated to the City of Columbus Recreation and Parks Department to help restore the Feddersen Community Center basketball court, with many Buckeye basketball players participating in the celebration of its reopening.

In partnership with @ColsRecParcs, @ChrisHoltmann and his wife Lori helped provide funds to resurface the outside grounds of the Feddersen Community Center and joined in the groundbreaking ceremony yesterday.#GoBucks pic.twitter.com/4JmKaXPMl7

Meanwhile, the rest of the Ohio State basketball team continued to prepare for their upcoming exhibition games in the Bahamas, the first of which takes place today against the Egyptian national team.

Even further across the Atlantic Ocean, more good news arrived this week for Ohio State basketball when former Buckeye Deshaun Thomas became the newest recruit to Olimpia Milano of the Italian LBA.

Coming back to training camp(s), many professional Buckeyes lit the NFL on the preseason precipice. However, literally no one has turned more heads lately than Chris Olave.

Given Michael Thomas’s rep in league circles and beyond as the ‘Slant God’, it looks like he may soon have competition for that title in the form of yet another former wide receiver. Ohio State. Given the abundance of short-course prowess for the Saints, it’s fair to wonder if Drew Brees is currently spending his days wondering if he should have postponed his retirement.

Again, Bradley Roby seems to have more success staying with the enlargement formerly recognized as CO2.

Eli Apple appears to be having similar success sticking with his elite NFL teammates on their training runs, given recent comments made by last season’s NFL Offensive Rookie of the Year Ja’Marr. Chase.

Ja’Marr Chase and Eli Apple fight and talk trash at Bengals training camp. “He pisses me off, I’m not going to lie…” @WLWT #Bengals pic.twitter.com/DcUNQwFQR3

Not to be outdone by his own former Buckeye teammate in New Orleans, Garrett Wilson continues to make a splash in his new home with the New York Jets while respecting the fans of the program who have watched him forge a name of a national value. acknowledgement.

you knew @GarrettWilson_V would find the @OhioStateFB Jersey pic.twitter.com/kvFy4ucLWs

Rumor has it in the Bay Area that Trey Sermon also appears to be having an impressive start to training camp after also receiving plenty of praise last offseason.

He looks amazing there, running with power and conviction, being decisive with his cuts and displaying an explosion when he bounces outwards

Even outside of the top tier of professional football, former Ohio State players have been making a lot of noise this week. Cardale Jones has teased a return to the XFL for the league’s scheduled return in February 2023.

Although he no longer plays football, Harry Miller seems clearly determined to continue the trend of retired offensive linemen making substantial slimming soon after their playing days are over.

260 pounds (-60 from March 31). 4 months of training and finally completed a mile in under 6 minutes. Sic Parvis Magna. pic.twitter.com/HvmKp6BTiz

I enjoyed my experience at the Deans Charity Steer Show at the State Fair.

Thanks Ashton Bain for showing me the ropes of showing a steer! You are a pro!!! pic.twitter.com/FtSLam423F

The rest of the week saw an abundance of Buckeyes land on several preseason outstanding player awards watchlists, including Zach Harrison and Ronnie Hickman as names to watch for the Chuck Bednarik Award.

The Maxwell Football Club today announced its watchlist for the 28th annual Chuck Bednarik Award, given annually to college football’s outstanding defensive player. Find out who made the list here

Other Ohio State players who earned pre-season positional accolades include:

The volume of preseason standouts for the Buckeyes makes sense given not only the team’s consistent success, but also the abundance of quality leadership among its most experienced members over the past several seasons.

.@OhioStateFB is tied for second among prospects in @seniorbowl over the past 4 years with 13, including WR Terry McLaurin and Pro Bowl OG Jonah Jackson. This year we like EDGE Zach Harrison, DB Josh Proctor, OT Dawand Jones, CB Cameron Brown and DT Taron Vincent.#TheDraftStartsInMOBILE pic.twitter.com/Uc3ShcUBC4

This standard of excellence seems to permeate every member of the upper class in the state of Ohio. Although Harry Miller announced his retirement in March, the remaining linemen still seem eager to continue echoing classic literature and philosophical quotes.

We become what we repeatedly do. Excellence is therefore not an act but a habit. Aristotle
Practice 1 @tyhamilton__ #Rushmen #Strength and honor pic.twitter.com/io8LFhsRfx

Although for some the college football season may seem even further back in time than the days of ancient Greece, take comfort in knowing that the first kickoff is just four weekends away. of today.