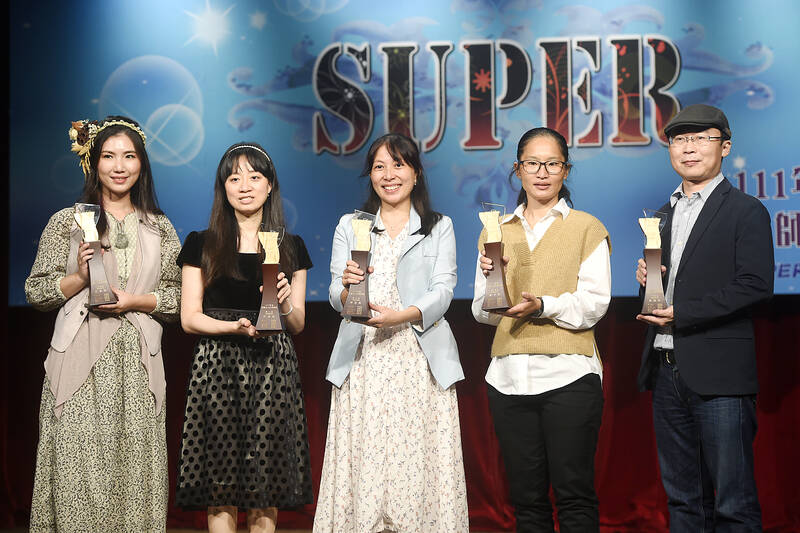 VALUED CREATIVITY:
The Super Teacher Awards recognize educators who have adapted their teaching methods to their field and the background of their students

The annual Super Teacher Awards honored two educators on Saturday for encouraging their students in rural communities to enjoy the outdoors and experience agriculture first-hand.

The awards were presented ahead of Teachers’ Day on Wednesday.

Kuo, who teaches at the kindergarten affiliated with New Taipei City’s Jingmei Elementary School, was credited for cultivating an appreciation for aesthetics among her students over the past 10 years.

She said her teaching philosophy is to live closer to nature and she takes her students outdoors for lessons that often involve working the soil.

Kuo enlisted the help of local residents to teach her students how to plant seeds, which she says helps build character and empathy.

Hsu, who teaches at Nanhua Elementary School in Tainan, said she emphasizes the importance of the outdoors to guide her students.

As her school is in an agricultural area, Hsu asked her students to join their parents in fields, such as mango plantations, to better understand their families and find new ways to engage with each other, she said.

The awards also recognized other teachers for using alternative means to motivate their students.

Chen Chao-hsun (陳昭勛), who won the award for best high school teacher, started working as an English teacher at Mu Zha High School in Taipei after returning from Australia, although that was not what he she had in mind.

Chen has a background in traditional Chinese medicine and she originally hoped to become a medical intern in Taiwan.

However, due to a bureaucratic error, she ended up teaching at the school.

She teaches a special class in which she imparts her philosophy and pedagogical ideas to other teachers as Taiwan strives to become a bilingual country.

For mixologist Liu Wei-wu (劉緯武), who won the award for Best Vocational School Teacher, teaching students about cocktails isn’t just about giving them the necessary skills; it is about transmitting a certain art of living.

Liu teaches his students the value of self-cultivation, being humble and embracing the etiquette seen in cocktail bars.

He said he encourages them to avoid the Taiwanese culture that values ​​excessive drinking rather than enjoying a drink and understanding what they are drinking.

The awards were launched in 2003 by the National Association of Teachers to recognize educators.

Comments will be moderated. Keep comments relevant to the article. Remarks containing abusive and obscene language, personal attacks of any kind or promotion will be removed and the user banned. The final decision will be at the discretion of the Taipei Times.