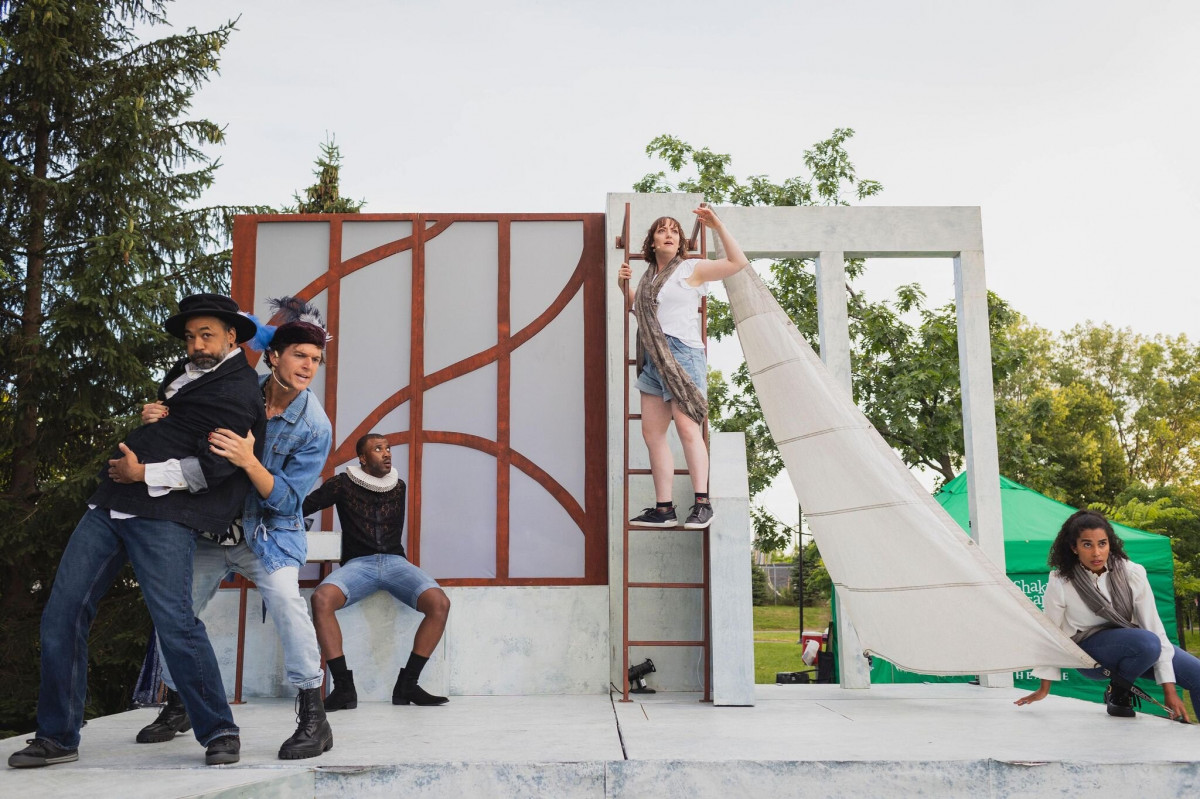 Founded in 1988, the Repercussion Theater is best known for its annual performances of Shakespeare-in-the-Park.

Traditionally, a cast of 10 to 12 actors crisscrosses Montreal each summer to put on a Shakespeare play in various green spaces.

This year was different. After canceling Shakespeare-in-the-Park two years in a row due to COVID-19, the theater returned with a smaller cast and a completely different setting. From July 14 to August 6, Repercussion Theater visited 18 different parks to present the original Shakespeare-inspired play Everything will be alright free.

Amanda Kellock, Artistic Director of Repercussion Theatre, explained that Everything will be alright grew out of bi-weekly conversations she had with fellow directors, actors, and scholars. According to actor Anton May, this original Kellock piece “covers all the grounds of what we as a community, especially here in Montreal, are going through during the pandemic.”

For the first year and a half of the pandemic, Kellock met every two weeks with people from across Canada for what they called “The Candid Covid Canon Conversations.” They read a different Shakespeare play between each meeting and discussed every two weeks as a group what struck them as readers living in a pandemic.

“Conversations […] became a life raft during a really tough time, and we’re still emailing each other to check in,” Kellock said. “Actually, we still have a few pieces left to read that we haven’t been able to read.”

Jeremy Smith, Artistic Director and Founder of Driftwood Theatre, an outdoor theater company that tours Ontario, said these encounters “helped me feel connected to a group of peers at a time when , professionally, I didn’t feel connected to a lot of anything.”

He added that these conversations were lively and aimed “to connect with this material that we all love as classic theater makers.”

“It was important to help me keep my sanity through most of the pandemic, even though I couldn’t be at every meeting,” Smith said.

The difference between Everything will be alright and previous Shakespeare-in-the-Park productions — apart from the small cast size of five performers — was that it only included about “10% Shakespeare,” May said. The remaining 90% were various sketches written by the creative team in conjunction with the actors. According to Kellock, these sketches were still being polished during rehearsals.

“It’s basically a show that really lets an artist showcase their range,” May described. “Because it’s a mix of Shakespeare pieces and different texts, it’s really a chance for me to dive into all these different types of characters that I’ll probably never get to play as a queer black man,” he laughed.

Having such a small cast – for reasons partly due to the pandemic and partly due to lack of funding – also presents its challenges, May added, because everyone is almost always on stage and very little time. is allocated for costume changes.

“It’s very very demanding and challenging, but it’s so much fun,” he concluded.

As for what the Repercussion Theater will do next summer, Kellock said the theater has “a lot to do financially.” Normally their cast consists of 10-12 actors, but she doesn’t think that will be possible next year.

For Smith, this year wasn’t so much about recovering from an ongoing pandemic as about “dealing with it,” he said, adding that throughout the pandemic, Driftwood has relied entirely on support from provincial and federal governments. Their earned income had dropped to zero as they could not sell any tickets through their pay-per-view service.

“While everyone talks about the public coming back strong, that hasn’t always been our experience,” Smith said. “It’s been harder to connect with the public in some ways because we’ve been away from them for two years.”

Kellock described the past two seasons as having been a rollercoaster ride, with crew members receiving COVID-19 and having to self-isolate as well as pandemic-related production delays.

“It was a long process with all kinds of different elements,” Kellock said, “but it was wonderful to create the piece and then share it with an audience and have immediate feedback on it.”

She then added that while she is very proud of this year’s shows and the positive feedback they have received, she is becoming increasingly aware of the precarious state of outdoor theater amid climate change.

“I’m torn between being proud [of this season and being] aware of the difficulty of doing outdoor theater in the midst of climate change and brutal heat,” Kellock said.

Smith explained that the unpredictability of summer weather “will force us to be increasingly careful about how we plan for the seasons.” For about 90% of tour locations, he added, Driftwood has an indoor backup location.

He said if the summer months continue to deliver hot and unpredictable weather, the outdoor theater will need to be redesigned and perhaps brought in earlier or later in the year, which would change the audience dynamic. .

“It’s a really strange time to do outdoor theater because I feel like on the one hand it’s so necessary and so good for people’s souls and on the other hand I don’t legitimately don’t know how long it can survive,” Kellock admitted.

Sophie Dufresne is The link Flight. Community writer of 43. They work simultaneously on 3-4 articles at any time.