Rewarding hilly hikes despite the challenges 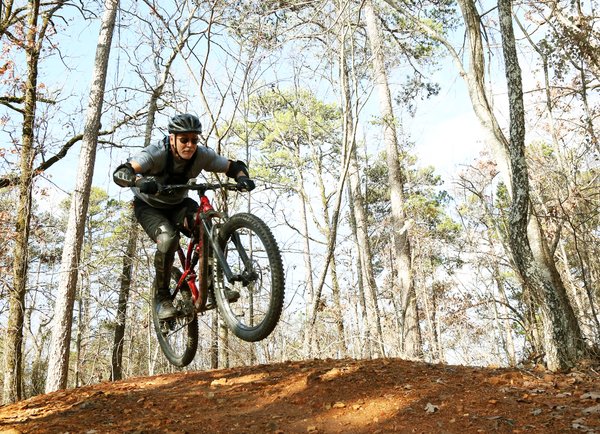 I have been riding my road bike regularly for a few months and the progress has been rewarding. I log a 30 mile ride on a weekly basis, and usually manage to do a few more rides. Although they’re barely that long, I pick spots where I could focus on the hills.

And the results? Well, I lost an excess of 30 pounds. In turn, I sleep better, I have more energy and my resting heart rate has noticeably decreased.

I’ve reached a point where I feel much more confident in my fitness and stamina. I was willing to take risks and try something new – something that would probably prove more difficult.

That being said, there was a time when I found fun navigating through the woods, via single track trails. But the appeal has diminished with age, as my eyesight isn’t as keen and my reaction time is a bit slower than it was ten years ago.

Do not mistake yourself. I am not unable to ride on trails. It’s just hard to get excited about an activity that makes me tense.

However, Sandy sparked interest by suggesting that we dust off our mountain bikes and embark on a tour along a dirt road.

The gravel surface would certainly lend itself to a totally different ride than I had become accustomed to. In fact, I was convinced that it would prove more physically demanding.

Well, we crawled out of the bag early the next morning, loaded up our bikes, and headed to a destination that had been determined hours before.

Arriving shortly after the rising sun had declared it a new day, we unloaded our bikes from the rack, put on our helmets and gloves, secured our water bottles and were on our way.

The initial section of the ride was pretty smooth and extremely flat. A piece of cake. However, it didn’t take long to conclude that I was paying little attention to the terrain when driving my van.

I had hiked this particular route time and time again, but never noticed how many hills lurked along the way. Fortunately, some climbs were barely noticeable.

But there were a few climbs that required me to shift several gears before reaching the top. In fact, I can think of two in particular that made me question my fitness, one of which was on the verge of being intimidating.

To say I was relieved after finishing the climbs would be an understatement. And I certainly appreciated the opportunity to catch my breath on the fast descents on opposite sides.

But there was also a small voice, deep inside me, haunting me with a fact that could not be ignored. There was only one path leading to the truck. And those descents so enjoyable would ultimately be the proverbial thorn in my side.

It was inevitable. We eventually had to turn around and return to the starting point. And each descent that I had savored proved just as, to say the least, as hard to climb.

But there was still another small voice that was eager to share the good news. I would also have the opportunity to race down the hills that had already tested my endurance.

Enough of listening to those little voices. There was certainly no need to relive the past or focus on difficulties that might lurk in the near future. Instead, it would be nicer to just enjoy the beautiful surroundings I was in right now.

So that’s what I did. I slowed my speed and absorbed the scenery around me. I savored the fresh air and welcomed the aroma of a forest still moist from recent rains.

I admired several species of wildflowers that had weathered the summer and painted the roadside, and admired a manicured field where a farmer had recently cut hay.

I imagined dancing a chug-bait alongside a colony of lily pads as I crossed a secluded river and watching a blue heron scour the shallows for its next meal was the icing on the cake.

Upon finally returning to our rig, I was certainly aware that I had encountered a few challenges along the way. But the hills I climbed weren’t what I remembered most. Instead, I felt blessed to experience another excursion in a setting that I often call wonderful nature.