Cynthia M. Goodell
Outdoor challenges
Comments Off on Reusse: Voelz took on challenges – and sportswriters – to fight for women’s sport U

Reusse: Voelz took on challenges – and sportswriters – to fight for women’s sport U 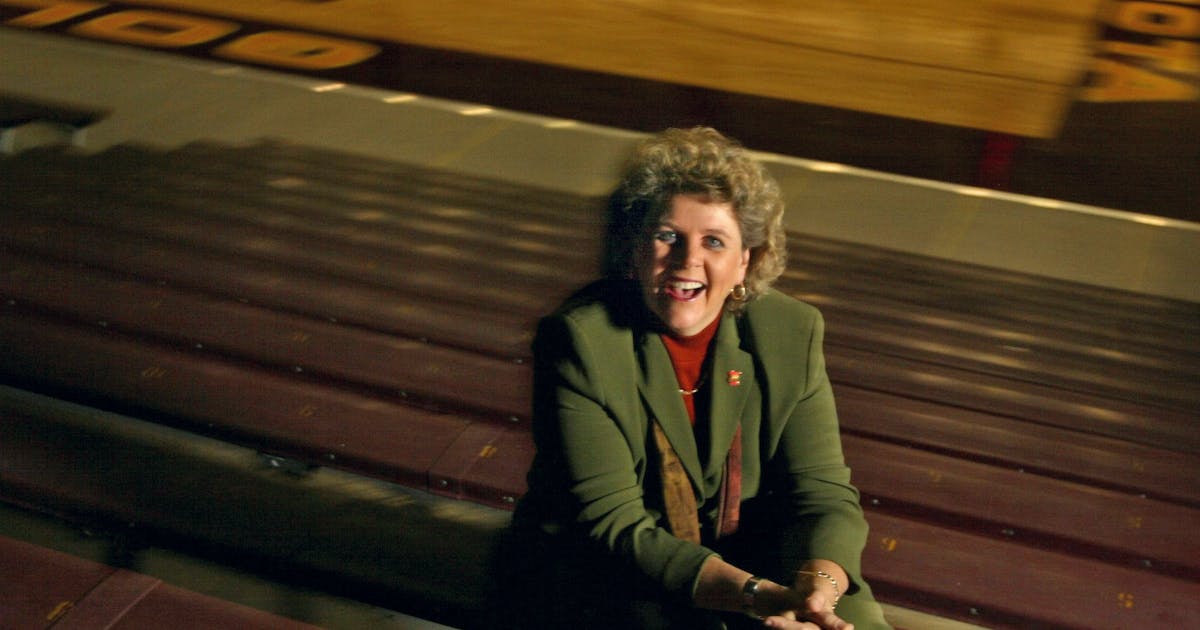 The third group since Sid’s sole entry will be inducted Wednesday at 6 p.m. in the Rotunda at the Mall of America. This is officially the class of 2021 and it will be made up of eight women: seven exceptional athletes with a deep connection to Minnesota and Chris Voelz, the University of Minnesota’s women’s athletic director from 1988-2002.

All 72 pre-Sid awardees plaques – awarded in various classes from 1958 to 2006 – were displayed at the Metrodome. We blew up that Dome, and what will be 93 plaques after Wednesday’s ceremony has yet to regain its walls of honor.

When that happens, we can only hope that when visitors encounter Sid’s plaque, their eyes won’t have to travel far to see the one honoring Voelz.

Sid is gone now, at the age of 100 and a half in 2020, so he can’t complain about such a placement. Plus, it would bring a smile to any of us who found ourselves in this maze of disagreements between The Man and The Director.

“According to Sid, women’s sports were going to ruin college football,” Voelz said. “He made it look like I was the one throwing passes in the end zone…or that I would have hired [Tim] Brewer.”

It was part of a phone interview with Voelz last week that lasted 53 minutes. It was outstanding even before it started, with this throwback text at Voelz’s interview request:

It wasn’t the last of his text responses. I used the word “stubborn” to describe her stance on creating a better all for female athletes in Minnesota.

Voelz convinced me that “stubborn” was a better choice. The next day she sent this postscript:

“One of the best daily fundraisers for me in Minnesota should be credited to you and Sid. Every time you wrote against me, or the women in Gopher, or the women in sports, I got a call of Kathleen Ridder to meet her at the Minneapolis Club for lunch.

“She would sit with me in a prominent place and when Sally Pillsbury, or Marilyn Tickle Bryant, or Maxine Nathanson, or Gladys Brooks, et al, passed by, they would refer to the article and pull out their checkbooks. And I would have him returned to the Bierman Building with more resources for our women.

“Did you know about that?”

Shit, no. I never imagined that the annual Turkey of the Year column on Thanksgiving morning could be a fundraiser. I checked this week and Voelz has been invited to Turkey’s banquet five times. She was never honored as an annual winner, although she was cited for lifetime achievement.

And here’s a sure sign of desperation for me, as president of Turkey’s banquet: I’ve used a Mother Teresa joke – as in the fiery Chris couldn’t have gotten along with her – twice in five years.

Voelz has been missing from the Minnesota scene for two decades. The former hockey arena she fought to turn into a home for women’s athletics – primarily basketball and volleyball – has been named “Maturi Pavilion”. It’s almost a mockery, as Joel Maturi was the sporting director after the men’s and women’s departments were brought together under one roof and Voelz left in 2002.

Voelz was a builder of Gophers, that’s for sure.

The softball team has a baseball stadium named after Jane Sage Cowles, a Voelz promoter. The football team has a stadium named for Elizabeth Robbie, mother of Voelz booster Deborah Olson. The Ridders, supporters of Voelz, were the main donors to Ridder Arena, the home of women’s hockey since 2002.

“I spent a lot of time every year in the state legislature,” Voelz said. “To start hockey, I said to them, ‘If the state comes up with 50 percent of the money, we’ll build an arena that celebrates women’s hockey in Minnesota.

“We started the program in 1997. We were among the first. We didn’t have many teams to play.

“Initially, I went to Herbie Brooks to help us find support. Herbie was awesome. He was fiercely in favor of hockey for all. We always needed male allies, and we found many more who were ready.

Voelz’s first construction effort involved a new first-class aquatic center on the former site of Memorial Stadium. Prior to the arrival of what is now the Jean K. Freeman Aquatic Center in 1990, the Gophers’ Pool was located next door in the former Cooke Hall.

One action that caused many of us to enthusiastically take after Voelz was when she let go of Steph Schleuder as volleyball coach of the Gophers in 1995. Schleuder had held that position since 1982 and had reasonable success. in a sport then dominated by West Coast programs. .

Voelz thought bigger. She found what was then a high salary to hire Mike Hebert, who had turned Illinois into a Big Ten powerhouse.

“How did it work? she said last week. “If we hadn’t had the Pavilion as a volleyball facility, we couldn’t have hired Hebert. And if we hadn’t had Hebert build an exceptional program, you wouldn’t have Hugh McCutcheon there- down now as one of the best coaches in America, filling the arena for games.”

The Pavilion was not helping basketball in the late 1990s. Voelz hired Cheryl Littlejohn had terrible seasons. Littlejohn was released with some controversy and Voelz signed Brenda Frese (then Oldfield) for the 2001–02 season. Out of nowhere, the Gophers had a 21-7 regular season and won an NCAA Tournament game.

“According to Sid, women’s sports were going to ruin college football. He gave the impression that it was me throwing passes in the end zone. . . where I would have hired [Tim] Brewster.

Frese took off for Maryland after that one season. She turned the Terps into a powerhouse, including a national championship in 2006. Voelz was on the verge of leaving, but wanted to find the next coach.

Lindsay [Whalen] was going to be a junior,” Voelz said. “There were two main candidates. I asked Lindsay to meet the two for breakfast on campus, explain the team we had back, and then give me her reaction.

“We went with Pam Borton and the Gophers were in the Final Four two years later.”

Whalen, now head coach of the Gophers, confirmed that story this week.

Voelz was inducted into the Gophers Hall of Fame in 2007. She lives in Coeur d’Alene, Idaho in the summer and Palm Springs, California in the winter. She served as executive director of the Collegiate Women Sports Awards [CWSA] since 2012.

She’s proud of the battles she’s fought — for facilities, for a fairer definition of equality for female athletes — and remains a Gopher at heart.

Reiss’ biography as a winner included the information that growing up, her favorite volleyball player was Penn State’s Megan Hodge.

“Chris Voelz congratulated me and added that she was disappointed to see that I was a growing Penn State fan more than a Gophers fan,” Reiss said. “She was joking. Sort of.”

I’m not sure there were any opinions from Voelz about the coverage she received from a few veteran Minneapolis sports scribes during her time in Minnesota.

What we can say: She won, benefiting the excellent women’s sports program Gophers today.