Cynthia M. Goodell
Outdoor space
Comments Off on Outdoor space dedicated to the memory of an old

Outdoor space dedicated to the memory of an old 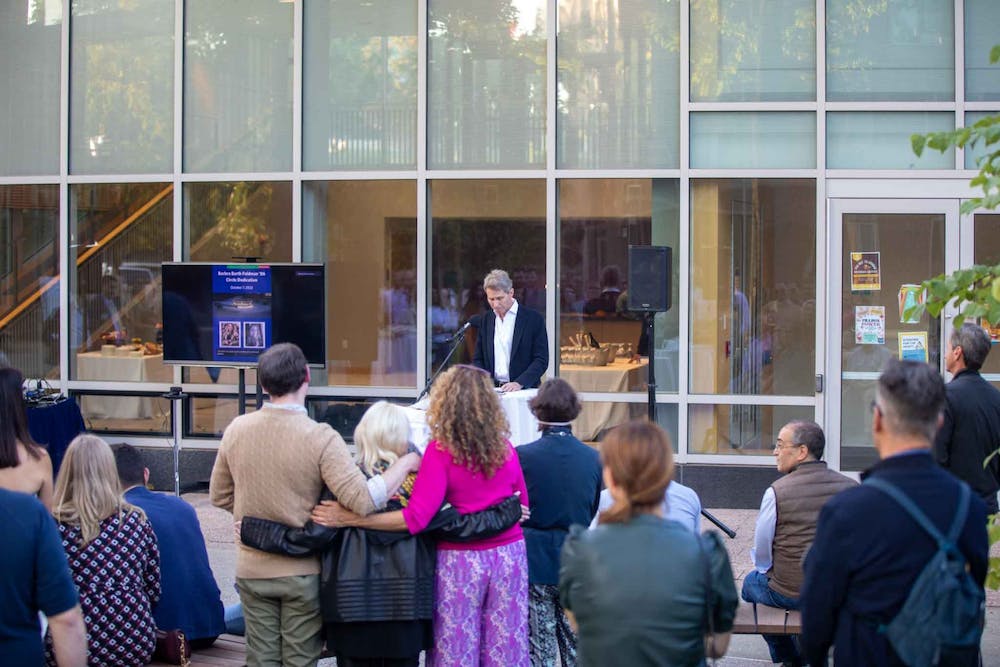 The Brandeis alumni built the space in memory of Feldman, their close friend. She passed away in August 2019, and following her passing Stephen Weiss ’86, a friend of Feldman’s, was the first person to suggest doing something in her honor. Feldman’s friends initially offered a hostel on campus, but were ultimately not allowed to have one. However, they knew they wanted to create a space on campus that would allow students to come together and have fun in the same way that Feldman brought people together throughout his life.

Daughter of Mrs. Janet Dubin Barth and Dr. Nathan “Nat” Barth, Feldman grew up in Lawrence, Long Island, with her older sister Rachele Barth Tinkelman. According to an Oct. 4 interview with Judge, one of Feldman’s friends, Amy Bergner ’86, described the family as close-knit and extremely devoted to one another. As adults, Feldman and Tinkelman lived six houses apart to raise their children. Feldman is survived by two children: Andrew Barth Feldman and Samantha Barth Feldman. Barbra loved the theater and passed that same passion on to her children, the most prominent example being Andrew, who starred in “Dear Evan Hansen” on Broadway.

There were two main reasons for choosing Ridgewood Quad for the memorial. Feldman lived at Ridgewood Quad for two years as a freshman and sophomore, and many friends brought back fond memories there. In addition, according to the plans of space, the University recognized the need for more outdoor spaces and had already considered ways to improve Ridgewood Quad.

Feldman’s friends wanted to build a space that evoked the same qualities his friends cherished in Feldman: inclusiveness, generosity, warmth and openness. Nothing about the architecture of the space was accidental, and many structural elements paid homage to Feldman’s life and personality. They designed a circular space to represent Feldman’s inclusiveness and how she always had room for one more person. Bergner said they wanted the design to be soft and round rather than hard with sharp edges. There are glow-in-the-dark blue stones scattered throughout the concrete, and the color blue is a reference to a multitude of things, representing Brandeis, Feldman’s love for the ocean, and the musical Dear Evan Hansen in tribute to his son. (the main character Evan Hansen wears a blue polo shirt in the musical).

The center stage is a tribute to Feldman’s love for theater and connects to the original idea of ​​a hearth. It also serves as a solarium. The sun terrace refers to memories of Feldman and his friends sunbathing together. In an Oct. 11 interview with Judge, another Feldman friend, Bonnie Notis, recalled how they put foil on record album cases to sunbathe on the river bank. Charles. The central platform is made of concrete and is illuminated by LED lights that emanate from the center. In addition, five new red button trees have been planted in the quad.

Planning began shortly after Feldman’s death. Aaron Louison ’11, executive director of the Department of Annual Leadership Giving for Brandeis University’s Division of Institutional Advancement, was the project’s development liaison, and he worked with donors to raise funds. funds for construction, communicated donor interests, and collaborated with Brandeis’ facilities staff, architects, designers, and contractors. They spent the next year raising funds, and from fall 2019 to spring 2021 they worked on architectural plans. After finalizing the design, the next six to seven months consisted of a final fundraising period to meet their monetary goal for the project. The group eventually raised $200,000 from around 100 individual donors. Construction began in early June 2022, and the space was completed just before the start of the academic year.

Brandeis hired Studio 2112 to design the space, and Brandeis facilities staff managed the entire construction process. Facilities staff who led this project include Michael McGarry, Casey Russo and Dan Feldman. Several companies handled different aspects of the construction. Joe Parker, an electrician from Amore Electric, donated all parts and labor for the project as he was touched by the story behind the space.

Tasks and responsibilities were divided between two committees: the fundraising committee and a small central committee. The fundraising committee included 20 people, all Class of 1986 alumni and friends of Feldman. From this initial committee, a small committee of six reviewed the architectural plans, came up with ideas for the design, and had the final say on larger decisions. The central committee consisted of Fran Zarrett Sloan ’86, Sharon Green Leighton ’86, Amy Bergner ’86, Danielle Klainberg ’86, Bonnie Notis and Debbi Winograd Shedlin ’86. Two members of both committees, Shedlin and Bergner, were also co-chairs, and they managed both sides of the process and spearheaded the entire project. Since the dedication took place at the 35th reunion of the Class of 1986, there was also a separate reunion committee whose purpose was to encourage alumni to return for the dedication and other reunion events. The reunion committee chairs were Staci Clopper Berkson ’86, Richard Hirsch ’86 and Klainberg ’86.

There have been some difficulties in the process due to the pandemic. The core committee planned to visit the campus in March 2020 to tour Ridgewood Quad and discuss the space plan with designers and facility staff. Because the onset of the pandemic directly conflicted with this meeting, the central committee was never able to come to campus and meet with them. At first, they didn’t form any alternative plans because they didn’t know how long the pandemic was going to last. They waited until early fall 2020 to move forward with the project due to uncertainty over the end of the pandemic. Therefore, meetings with architects and installations are done virtually.

During the dedication event, Feldman alumni and friends gathered around the Barbra Barth Feldman ’86 Circle at Ridgewood Quad and caught up with each other while Feldman’s favorite music played in the background. Louison gave an introduction before handing it over to Corey Notis ’84, Feldman’s community counselor when she lived in Ridgewood and one of her closest friends. Notis has shared many sentimental memories about Feldman, including when they first met and when they met Feldman’s family. He called her the “it-girl par excellence” and explained how they had become like a family. Befriending Feldman was very easy, and when people entered his orbit, according to Notis, they never wanted to leave.

Notis described Feldman as a kind person who would help anyone with anything. He recalled that when Feldman spoke, it was a combination of laughing and talking at the same time, which he called “talking laughter”. He talked about Feldman’s love of Milan sweaters, photography and beaches, as well as memories of going to Steve’s Ice Cream during the winter and a trip to Martha’s Vineyard. He said: “We are all here because we have been very deeply touched by Barbra. Our lives were made better by his friendship and we lost a part of ourselves when he passed away.

Finally, a video made by Feldman’s son, Andrew, was released because he was unable to make it to the event. He described her as “the most amazing person I’ve ever known” and how she was able to make people feel seen. He explained how his mother’s friends from Brandeis became his family and said he thought building a space with the aim of bringing people together at Brandeis was a fitting tribute because “she continues to bring people together and make new friends. … It’s a real honor. After the speeches, all the participants gathered around the circle for a final song and a moment of contemplation.

According to an Oct. 5 interview with Justice, Shedlin said one of the most important purposes of space is for it to be used by future generations. The space already shows the influence of current students on him. For example, Louison said that when he spoke to students relaxing in the space, they referred to it as the “Barbra benches” rather than the “Barbra circle”. While the circle aims to commemorate an alumnus, it will also encourage members of the community to look to the future, serving as a space for future students to connect with each other like Feldman did to Brandeis. .