outdoor activities in bosnia and herzegovina 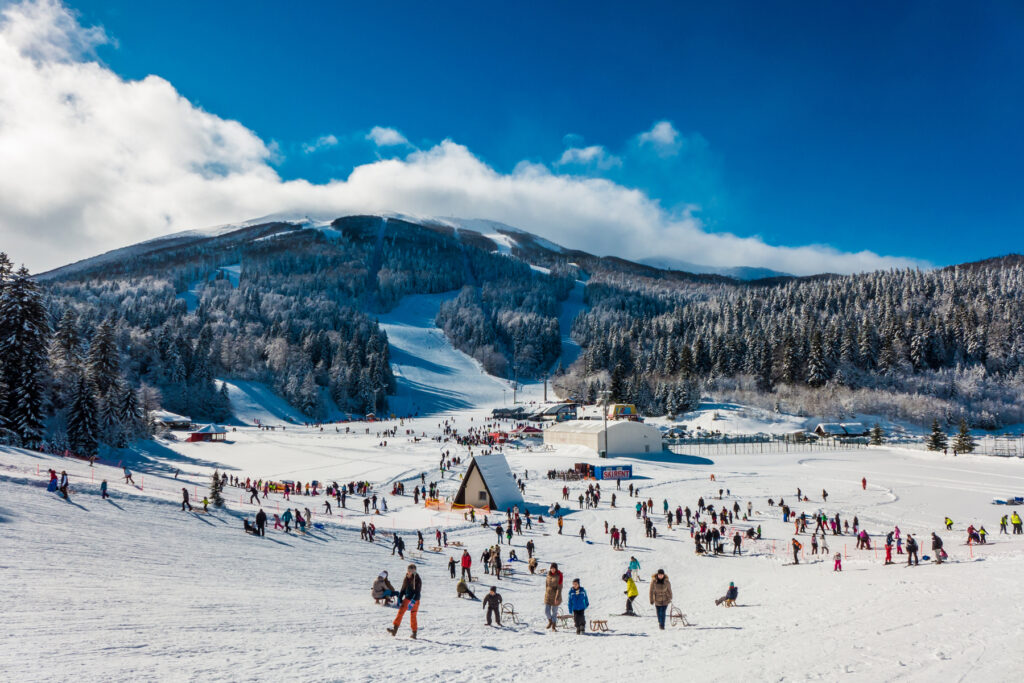 Often overlooked, Bosnia and Herzegovina is actually a treasure trove for outdoor travelers looking for Balkan adventures. Whether you want to hit the ski slopes of Sarajevo, hike the trails of Via Dinarica or try your hand at rafting, there really is something for everyone.

One thing people seem to notice and appreciate in Bosnia and Herzegovina is the willingness to walk. The Western Balkan region is located in the heart of one of the most unexplored and wildest mountain ranges in Europe – the Central Dinaric Alps – and a long-distance hiking trail, the Via Dinarica, has been developed to allow visitors to explore the landscape.

Composed of three paths, the white trail is the most developed and the most marked whereas the Blue and Green slopes are still in development. The Blue Trail has perhaps traveled the longest route in recent years with numerous cross-border projects being carried out between Croatia, the most successful being perhaps the new Ćiro cycle path see inset, which follows the old route Austro-Hungarian Railway.

Each trail – which together covers thousands of miles – offers something for everyone, including various challenges for a variety of fitness and knowledge levels. But what all trails have in common is that they offer a wide range of thrilling and relaxing activities on land and water. Hikers will undoubtedly be thrilled with the unexplored, world-class hiking inside some of the most breathtaking natural landscapes on the European continent. The region is a paradise for adventurers, nature lovers and those looking for a thrilling, extraordinarily beautiful and affordable experience.

BiH has seriously stepped up its ski scene in recent years with the introduction of more high-tech lifts and high-end facilities, making it a better time than ever to enjoy some of the best ski areas. from southern Europe.

Jahorina is the mountain range southeast of Sarajevo. Its ideal geographical position guarantees more or less four months of good skiing snow. Its highest peak rises to 1,910 m. The lifts go up to 1,894m with a fabulous view of Sarajevo. The slopes of Jahorina are covered with tall pines and spruces up to the tree line at 1,500 m. It’s the most popular ski destination in the country, so book ahead.

Alternatively, you can head to the Bjelasnica and Igman mountains, once the location of the 1984 Winter Olympics. Bjelašnica hosted the men’s alpine competitions, while Igman was the hub for all Nordic disciplines (ski jumping, cross-country, etc.). A total of ten ski lifts are operational at the Igman-Bjelašnica Ski Center. Bjelašnica has the best infrastructure and more challenging runs, while Igman is a bit easier and also has a children’s ski lift with gentle slopes to practice on. Bjelašnica has the steepest of all the ski slopes in the country – it’s quite a rush – and with little to no queuing or waiting.

There is also a complete set of mountain bike trails throughout Bosnia and Herzegovina, which you can find both on viadinarica.com and on the mountain bike association’s website. The narrow roads are not ideal for cycling, but places like Livno, Kupres and Glamočki Fields in western Bosnia have wonderful terrain for cycling in the long valleys with relatively little traffic.

BiH is well known for its white water rafting adventures and it is by far the most developed outdoor activity. Bosnia has four raging rivers that offer professionally guided rafting trips. The Neretva, Vrbas, Una and Tara rivers rank among the best in Europe and you will be pleasantly surprised by the wild nature that accompanies the ride. The 2009 World Rafting Championship took place on the Vrbas and Tara rivers, with teams from 35 countries competing, as did the European Rafting Championship in 2019.

Rafting on the Una and the Vrbas is an unforgettable experience and if you tackle the falls at Strbacki Buk, you’ve conquered some of the toughest in Europe! Almost all organized tourism in Bihac revolves around rafting and so if you don’t know where to go this is the perfect place to start. The two most experienced operators are Una Kiro Rafting and Bijeli Una Rafting.

The Trebižat River offers a great canoe safari with Capljina indicated as a starting point. The canoe safari is a 5 hour trip down the river southeast of the Kravica waterfalls, and the canoeing aspect is not difficult and suitable even for children. Expect your arms to be a bit sore afterwards, but the river is calm with only a few small (and fun) waterfalls to conquer. The water is cold and refreshing if you fall into it. Halfway through, you’ll stop for a barbecue lunch prepared by your guide’s team.

You have to be a pretty mediocre angler not to catch at least a few freshwater fish while fishing in Bosnia and Herzegovina. The rivers and lakes teem with trout, carp, bass and many other types of fish, and good fishing can be found in most parts of the country. Some of the best fishing rivers are the Pliva near Šipovo and Jajce; Ribnik, where the European Fly Fishing Championships took place in the summer of 2010; the Upper Drina; and the Neretva River.

There are a few fishing shops but gear is hard to find. It’s best to bring your own if you’re a serious fisherman planning a solo trip. However, organized fishing groups will most likely provide you with the rods and gear.

Enjoy huge discounts on a range of our books – up to 40% off!