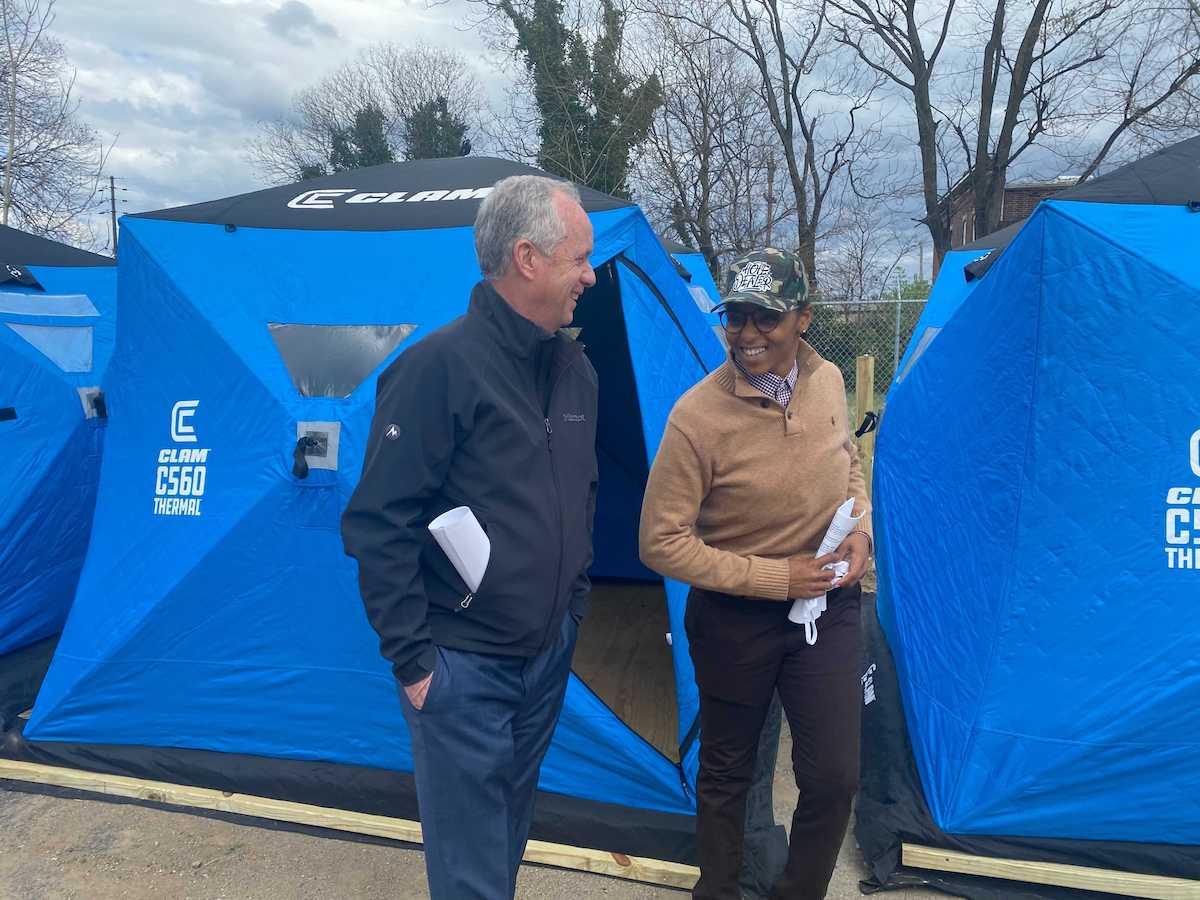 On Thursday, city officials provided an update on the Safe Outdoor Space Project that will shelter homeless people in ice fishing tents on city-owned land in Old Louisville, saying that at Barring any further delays, the program should be operational by the end of the month.

“We have had significant issues with the supply chain challenges that have brought us to this day and we hope they do not interrupt us here as we approach the end of the month,” said the mayor of Louisville, Greg Fischer, Thursday afternoon, in front of several blue ice fishing huts already assembled on the site. “When everything is there, we will be ready.”

The press conference on a paved lot at 212 E. College St. provided insight into the work underway in what will become The Hope Village. In space on Thursday, seven tents had been set up on wooden platforms and there were piles of tree debris being cleared for members of the media to work their way around. Electrical outlets protruded from the asphalt.

The Safe Outdoor Space project was first announced in August last year. In January, the city announced that the small, black-run nonprofit, The Hope Buss, would oversee the $1.5 million project and set a scheduled March 1 opening date. However, this opening date has been pushed back.

Part of the reason for the delays, Bussey said, was that she was “very, very particular.” As an example, she recounted how earlier Thursday she asked about pressure washing because she didn’t want people walking on dirt.

“People don’t just come here to live, but they come here for safety and stability, and we want this place to feel as family-friendly as possible,” she said. “We call it The Hope Village for a reason. Because the village is not only here, but it is each of us. It is all of us who come together.

The learning curve for her small organization continues, with Bussey saying she only recently found out that it would cost $6,000 a month to have portable showers at the facility.

When The Hope Village opens, it will accommodate up to 53 people housed in 48 tents. Some tents will be dedicated to couples, and dogs and cats will be allowed to live on the site. The Hope Village will only accept residents by referral, and on Thursday Bussey said they had already started receiving referrals. The project aims to meet people experiencing homelessness where they are, providing them with safety while connecting them to resources that aim to ultimately bring them into indoor housing.

Vincent James, who was previously the city’s community building manager and now runs the Dare to Care food bank, expressed optimism about the city’s approach to finding affordable housing solutions.

LEO featured The Hope Buss for the cover story of the March 2 issue. Check out the deep dive on the scrappy nonprofit here.

Keep Louisville interesting and support LEO Weekly by signing up for our newsletter here. In return, you’ll receive news with a benefit and the latest places to eat, drink and hang out in Derby City.