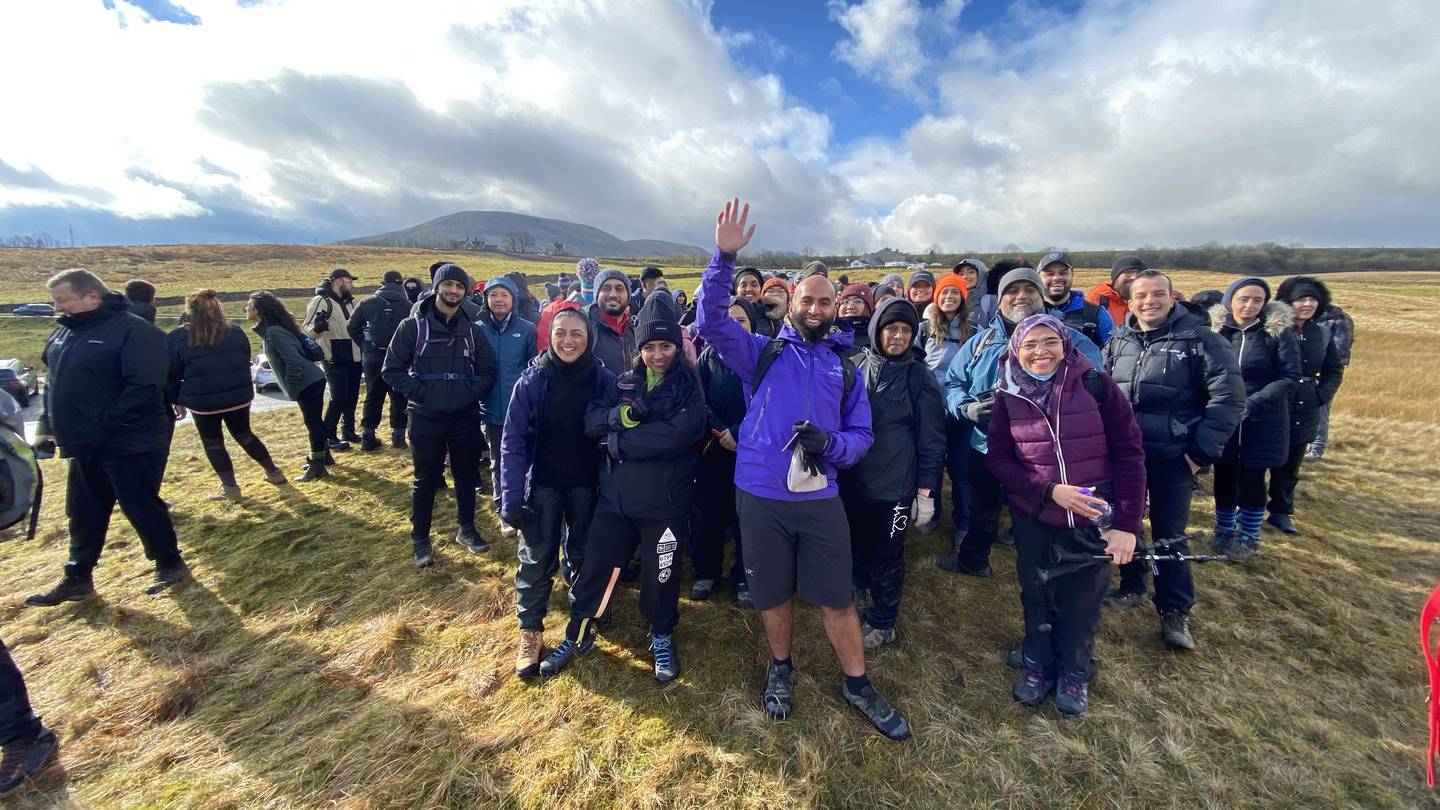 At the height of the pandemic lockdowns, Haroon Mota was eager to escape from his own four walls for fresh air and the freedom of the outdoors.

After taking on Everest, Machu Picchu and Kilimanjaro on Muslim charity treks, it was during the pandemic that the former European kickboxing champion realized he wanted to share his love of outdoor fitness with his community.

With Covid-19 severely affecting Muslims, having the highest death rates by religious group, he realized it was more important than ever to encourage healthier lifestyles.

This led him to form Muslim Hikers in September 2020.

“Hiking is not something Muslims traditionally envision doing, it’s not in our culture or our DNA,” he said. The National.

“You rarely see people from our community on the hills and I wanted people to see what they were missing.

“So I posted on Instagram to see if there was any interest in people wanting to hike and the response was overwhelming. It grew very quickly. The hikes sell out within 24 hours and I now have thousands of members.

Only 1% of national park visitors are from black, Asian and minority backgrounds

The 36-year-old, who was the European kickboxing champion at 17, is not wrong, latest figures from rural charity CPRE reveal that only 1% of visitors to the national park are from black backgrounds , Asian and Minority Ethnic (BAME) and only 20% of BAME children go to the countryside compared to 40% of white children.

“Muslim Hikers is a grassroots initiative to encourage people to get out more to get healthy and enjoy the countryside. I wanted to educate people about the campaign and give them a sense of empowerment and independence, being part of a group and building friendships.

“I started it in lockdown as a way to bring people together in a healthy way and break down barriers. Now we have a mix of ages participating and the momentum continues to grow.

“All are welcome, regardless of religious background or ability. Whether you are an experienced mountaineer or a novice walker.”

The former Penny Appeal charity worker is based in the city of Coventry, in the north of England, and his walks span the country, as do participant locations.

His latest attempt saw him take 130 members to the highest peak (736 metres) in the Yorkshire Dales National Park.

On a cold rainy morning, exposed on the moor next to the formidable mist-covered peak of Whernside in the distance, women stood in hijabs, standing with their walking sticks.

As the cruel wind battered walkers brave enough to make the trek up the Ribblehead Viaduct, a third of the large group raised their hands when asked, “Is this your first hike?” as the mountain guide prepared them for the worst.

“When you get to the top there are some stone benches, sit on the windless side. It’s really important that you stay as warm as possible, stay hydrated, avoid to have cramps and that you take care of each other.

It was a typical March day in the Yorkshire Dales, a few weeks earlier there had been snow and flooding.

But the (nervous) laughter and jokes among the attendees have not diminished.

“It’s my 60th birthday and I’ve walked 240 miles [386km] from Luton with my son and son-in-law to do my very first hike,” Intikhab Mahadik laughed in the rain.

“I’ve never done it before. It’s just something I never considered doing. We don’t have views like this in Luton.

“My family persuaded me to do it after seeing the message.”

“I love hiking, I’ve been hiking in Iceland,” she said.

“I came alone and to make new friends who also like to walk. There is nothing like it for the Muslim community.

Nur Nasser, 28, works at Coventry University and has hiked before.

This time she persuaded two of her friends, Siti and Musa, to join her – it was their first time.

“We saw the message for Muslim backpackers and thought it was an opportunity to meet new friends,” she said.

“I like to hike, but I don’t have many opportunities to do so because my friends aren’t interested. It is difficult to go there alone for security reasons.

“Hopefully the weather will improve,” she said.

“It’s my first ride, but I’ve read a lot about what we need, so we’re ready.

“I can’t wait to discover new places I’ve never been before.”

Online trolls have targeted the band with racial slurs

The camaraderie within the group was endearing, but only a few months ago participants unfortunately had a different experience when trolls posted racist comments on social media after a hike in the Derbyshire Peak District.

“The abuse we suffered was not very pleasant,” Mr Mota said.

“These types of comments, racist comments, only make it more problematic for those in our community who feel less empowered to come out.

“For people who might join for the first time, they might think ‘oh wow, is that what people actually think?

“One of the reasons we started Muslim Hikers was so we could be together and for greater diversity and inclusion.

“We have worked extremely hard to create a culture of trust in the outdoors.”

However, those who braved the English weather were undeterred and were more determined than ever to keep going.

“You would think comments like the ones we received would deter us, we know issues like this exist in minority parts of the community but in response to what they have done we have been overwhelmed with supportive comments,” he added.

“You can see by the turnout in Yorkshire, everyone is united. The group is not religious, it is open to all.

Hikers determined to walk during Ramadan

Their next hike is scheduled to take place next month during Ramadan and Mr Mota and his team of guides are currently planning the feasibility of the walk.

“We haven’t finalized the details yet, but there will be a hike,” he said.

“We had a lot of interest. Instead of the longer hikes we ran, I think this will be a shorter one.”

Mr. Mota is no stranger to endurance missions during Ramadan.

During the lockdown, he ran six marathons (253 km) in his area, running 10 km a day during Ramadan while fasting without food or drink for 18 hours.

His achievement raised over £50,000 for the Penny Appeal, which helps people experiencing poverty around the world.

But for those who are considering the next trek, Mr. Mota can reassure them it will be a pleasant experience.

“It’s important to listen to your body and walk slowly and reduce the intensity of the hike,” he said.

“It will be difficult, but we are here to have a good time.”

It seems the members are on board and already he’s been inundated with requests to join the ride.