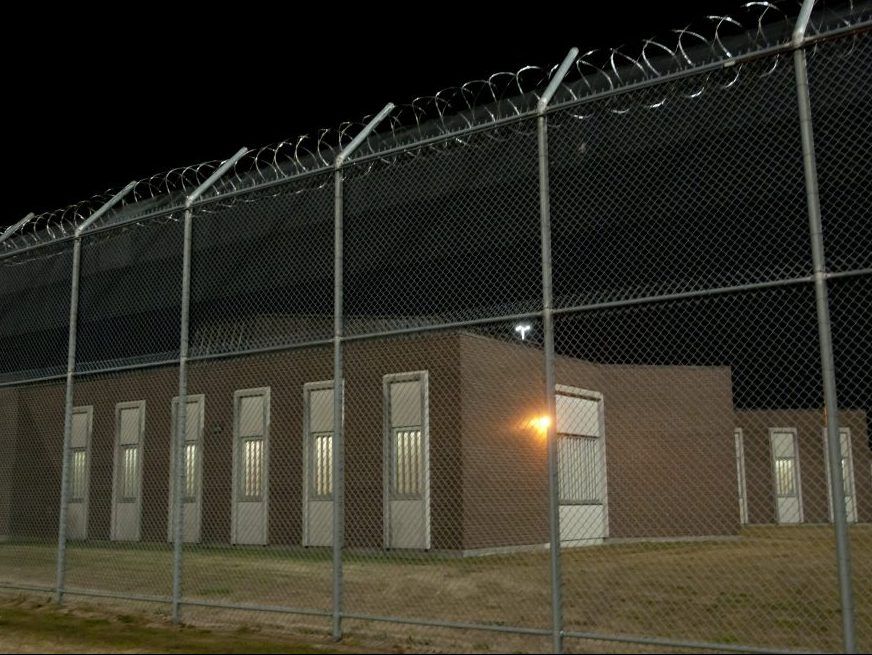 The province has shrunk and darkened the already dire outdoor space for inmates at Elgin-Middlesex Detention Center (EMDC), a London defense lawyer has said.

But the province says the jail’s renovated yard allows more inmates to get out and provides enough air circulation and sunlight.

Sign up to receive a curated collection of links and highlights from our award-winning news coverage, in-depth analysis and unrivaled weekday noon investigative features.

A welcome email is on the way. If you don’t see it, please check your spam folder.

The next issue of LFP Noon News Roundup will soon be in your inbox.

Alterations to the main yard for male inmates in seven units are due to be completed later this year, Brent Ross, spokesman for the Solicitor General’s Department, said in an email response to questions from the London Free Press.

“EMDC’s modernized inmate yard is organized into four sections, each of which can accommodate up to a full unit of inmates, typically 24 people,” he said.

“The ministry modernized the outer courtyard by dividing it into four distinct sections and adding skylights that allow both airflow and sunlight. By taking these steps, inmates will have increased access to outdoor activities, allowing more inmates to enjoy the fresh air.

But a London criminal defense lawyer who asked to remain anonymous said that was the opposite of what he had seen on a recent visit to the prison and what he was hearing from his clients.

“My heart fell in my stomach. The time they spend outside is limited and of a terrible quality, and now I think it has gotten exponentially worse,” he said.

Inmates get a quarter of the space they had before, without being able to walk very far in any direction, the lawyer said.

They are also under cover of a roof with what appear to be holes about 1.5 meters by 1.5 meters, instead of being open to the sky, he said.

“It is quite dark. It’s horrible what they did. »

His clients tell him that they went out very little during the renovations and that there is still work to be done, that they only go out every two or three days, the lawyer said.

“They’re not thrilled with what they’re going to face,” in the new yard, he said.

Getting some fresh air has been, at best, a sporadic break for EMDC inmates. Years of overcrowding and understaffing led to limited court time, before the pandemic demanded more restrictions on movement in the prison.

In a scathing review of the EMDC in 2019, Ontario’s Human Rights Commissioner raised several concerns, including the condition and use of outdoor space for inmates.

“The courtyards are small and cobblestone, and staff have noted that some of the courtyards are subdivided to allow incompatible prisoners to receive their court time simultaneously. Due to overcrowding and incompatibility issues, staff cannot ensure prisoners have daily access to the yard,” wrote then-Chief Commissioner Renu Mandhane.

The United Nations Standard Minimum Rules for the Treatment of Prisoners “emphasizes the importance of access to natural light, fresh air and ventilation. . . and requires inmates to get at least one hour of appropriate outdoor exercise daily. EMDC falls far short of these standards,” she wrote.

There will be few ways for the public to learn how the new yard works or not.

The province’s community advisory councils, set up by the former Liberal government to keep a public eye on prisons, were quietly killed by Doug Ford’s government last year.

The province has determined that the councils “do not provide consistent and meaningful local engagement despite significant administrative investments in their upkeep and management,” a spokesperson for the Solicitor General’s Ministry said at the time.

It also prompted a letter from the then Chief Human Rights Commissioner.

“This decision moves the corrections system in the wrong direction and will have a negative impact on the rights of prisoners. More independent and robust oversight is needed. No less,” Mandhane wrote to the province.