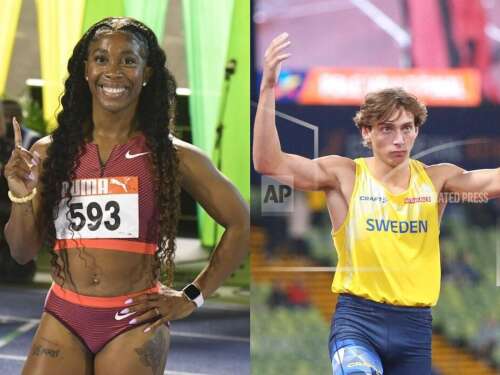 The five-time 100m World Championship gold medalist took on the challenge lightly during Thursday’s pre-competition press conference for Friday’s Memorial Van Damme Diamond League meeting where Fraser-Pryce is due to race the 100m.

“So, Mondo, how fast are you in the 100 meters…against me,” she asked the Swedish star.

“I would beat you,” he replied.

Fraser-Pryce was visibly surprised when he said his run-up was 45 yards and he ran 100 yards a lot in high school.

“But that was five years ago,” replied Fraser-Pryce, to which Duplantis, who holds the indoor and outdoor world records in the pole vault, replied, “but I’m much faster now than five years ago.”

They sealed the bet with a handshake as meeting director Kim Gevaert, who was leading the press conference, agreed they could stage the race.