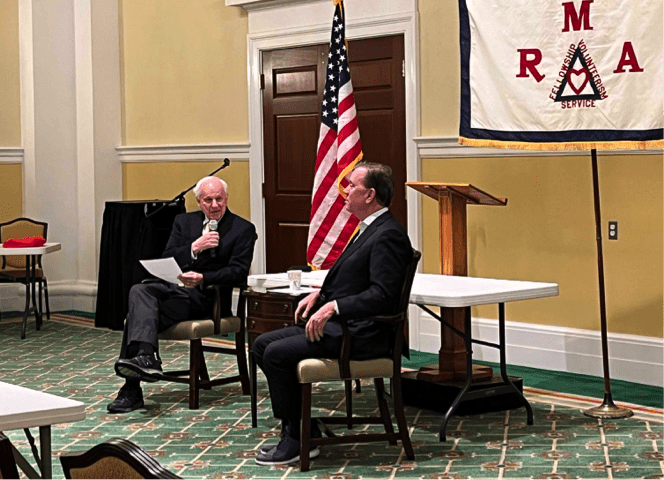 At the Greenwich Retired Men’s Association meeting on Wednesday, March 9, State Representative Steve Meskers introduced Governor Ned Lamont, commending the Governor for what he has done for the state in terms of revitalizing the economy and guiding through the Covid crisis. Governor Lamont returned the compliment, explaining that in addition to fighting vigorously for Old Greenwich, Steve had proven particularly effective in Hartford due to his ability to work across the aisle and bring people together. people.

In his opening comments, Governor Lamont noted that it had been two years to the day since he last ran in Danbury in response to the state’s first reported Covid infection. He recalled that his first reaction to the onset of the pandemic in Connecticut was to ensure that hospitals were not overwhelmed, as has happened in some other places. He also recalled the challenge of balancing the need to protect against the virus and the importance of maintaining certain critical functions such as manufacturing and outdoor construction. He acknowledged the state was hit hard by the initial wave of Covid but noted that Connecticut was now the most vaccinated and least infected state.

The governor also recalled that one of his first priorities was to put the state’s finances in order. He noted that the state had achieved three consecutive years of budget surpluses and that it had done so without raising taxes. He observed that he had often said “you don’t need more taxes, but I want more taxpayers”. To that end, he had worked to make the state more attractive to businesses and individuals. He mentioned lower taxes on real estate, cars and 401(k) withdrawals, as well as programs that incentivized companies to repay their employees’ student loans. The Governor noted that when he took office, he changed the approach to corporate recruitment. Rather than the traditional, defensive approach of offering a tax cut to companies that moved in, he emphasized the state’s highly skilled workforce and enlisted companies that are in the ‘state for a long time to sing its praises to potential newcomers.

Governor Lamont noted that the economy had recovered so well that one of the main problems now that there were about 100,000 jobs that employers could not fill. To solve this problem, the state determines the nature of the jobs that are open today and will probably be in the next few years, and it offers free training, which benefits both the trainees and the companies that will hire them.

Governor Lamont said he agreed with President Biden’s decision to stop oil purchases from Russia, noting that “you are not serious about sanctioning Russia unless you sanction oil and gas”. He acknowledged that the greatest impact of the Ukrainian war on the state would be felt at the gas pump, and he said he was considering a reduction in the gas tax as a short-term compensation for this problem. .

Hollister asked the governor about the state’s ranking of 46th in a CNBC ranking of states’ attractiveness to business, and the governor noted that was a ranking several years ago and we won. 15 places in a short time. An important factor in this improvement has been the surpluses recorded over the past three years, which has led to the state having a large rainy day fund that helps provide the financial stability so important to businesses. Informed of the slowness with which the state sometimes reacted when he was a businessman, he had also worked hard to speed up some of the state’s dealings with companies. The Governor concluded that the wind is now at our back when it comes to attracting business. Speaking of wind, Governor Lamont said Connecticut is ideally located to develop wind power due to fairly consistent wind levels several miles offshore.

In response to questions about infrastructure, Governor Lamont noted that the state will receive about $1 billion per year for five years due to federal legislation (with a requirement to match about 20-30% of that amount with state funds). He said he hoped to reduce the commute from Stamford to New York and New Haven by fifteen to twenty minutes in about five years, for both trains and cars. With regard to trains, he noted that old bridges that force trains to slow down were a specific problem that needed to be addressed. As for the cars, he said the solution was usually not to add more lanes, but to address specific choke points that were causing delays. Another infrastructure need it addresses is moving electrical substations out of flood-prone areas, which is especially critical now that “century storms” occur roughly every twenty years.

The Governor then answered questions from the audience. He approved exemption from the affordable housing provisions of the state’s 8-30g law for cities and towns that have a sound five- or 10-year plan to meet or approach the statutory 10% goal by several years. He believed localities should have the flexibility to determine how best to achieve the goal. When asked “where are the tolls at,” the governor bluntly replied “nowhere.” He acknowledged that the idea of ​​imposing tolls had not been popular, even though half of the money they would have raised would come from foreign vehicles that use our roads for free. He noted that due to the lack of tolls, a fee has been imposed on the larger tractor-trailers that use our roads.

Governor Lamont also mentioned an initiative to reduce the number of illegal weapons in the hands of minors. He said too often what once would have been a fight now turns into a shootout. The initiative will focus on gun traffickers who bring guns to the state.

Those interested in listening to the full discussion with the Governor can stream it at https://vimeo.com/686500120

The next presentation of the RMA will take place on March 23 with Robert Henrey, speaker on the historic encounters between the West and Asian culture and a former international tax and financial consultant. His informative presentation will focus on “China 1981” and his thoughts on China and how the world was about to change in 1980 due to China’s embrace of modernity following the death of Mao Zedong. in 1976. To stream this informative presentation at 11 a.m. Wednesday, March 23, click https://bit.ly/30IBj21. This presentation will also be available on local public access television channels, Verizon FIOS channel 24 and Optimum (Cablevision) channel 79.

RMA speaker presentations are presented as a community service at no cost to in-person or Zoom attendees. The RMA asks all eligible individuals to consider becoming a member of our great organization and thereby take advantage of all available fellowship, volunteer, and community service opportunities that the RMA offers its members. For more information, visit www.greenwichrma.org or contact Michael Ambrosino (mailto:[email protected]) or Peter Stern (mailto:[email protected]