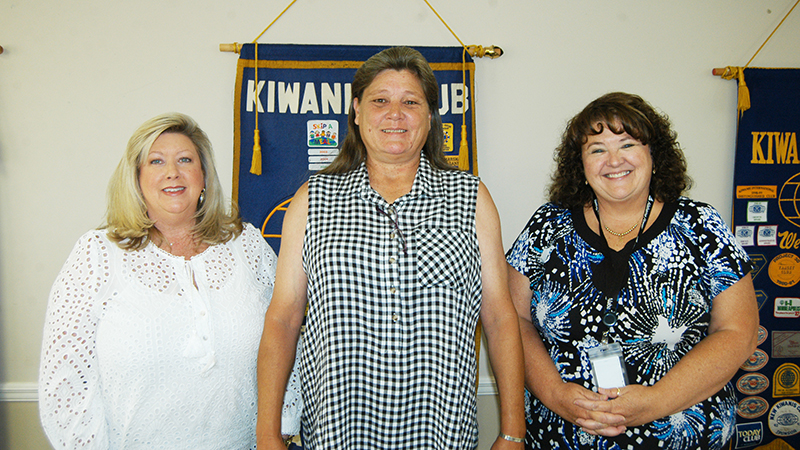 VALLEY — When she was growing up, Shon Sims was often told by her mother that she should have been born with a puppy under one arm and a kitten under the other. She was an animal lover from the start and this love for animals served her well during the 17 years as director of the Chattahoochee Humane Society animal shelter.

At Wednesday’s noon meeting of the Kiwanis Club of Valley, Sims spoke about the shelter’s current services and what the current board of directors would like it to be in the future.

The shelter is located at 3265 Fairfax Bypass on the south side of Valley. It serves all of Chambers County and receives annual funding from the Chambers County Commission and the cities of Valley, Lanett and LaFayette. At one point, about 4,500 animals were brought to the shelter in a year. It was an overwhelming number, making the shelter a veritable killing center. Many animals brought there were euthanized.

Things are much better now. Thanks to the good work being done in the form of animal rescue organizations, neutering, and leash laws, euthanizing animals at the CVS shelter is a relatively rare occurrence now. A total of 11 dogs were euthanized at the shelter in 2020 and only three in 2021. The numbers are higher for cats.

She explained that feral cats are not socialized with people and do not make good pets. If they are picked up by animal control, they will more than likely be euthanized at an animal shelter. It is in their interest to continue to live outside. This can be done through a wildcat program. This is a humane procedure where a cat can live out its normal lifespan without reproducing in the wild. Once captured, they are neutered or neutered and given the injections they need before being returned to the area where they were found. A feral cat that has been treated is marked by having part of its ear cut off.

The CHS aims to have a no-kill center, but is not there yet.

“Euthanasia is an ugly reality,” Sims said. “We don’t want to do that. We hate it. The rescues were very useful for us to avoid this.

Dogs are euthanized for medical reasons and in some cases when they are too aggressive.

The best way people can help the Chattahoochee Humane Society is to donate, Sims said. Donations can help bridge the gap between what the shelter receives from local governments and its expenses. The shelter receives just over $12,000 in local funding, but its expenses exceed $16,000. People can help not only with monetary donations, but also with pet supplies. It costs the shelter about $200 a week to get the healthy dog ​​and cat food and bedding the animals housed there will need.

A big problem to deal with is that shelter staff have no idea what an incoming animal was exposed to before being brought in.

“Parvo is lethal to dogs,” Sims said. “We don’t keep puppies because of this. We want a rescue to get them back right away.

Sims said it was unrealistic to compare what the Chattahoochee Humane Society is able to do to what surrounding communities are doing.

“Our donation base is very small compared to other communities,” Sims said. “We have four full-time and two part-time employees. The Lee County Humane Society has 27 employees, and that’s more than that in Columbus.

Chambers County is larger than Lee County but has a much smaller population. Lee has about 175,000 people compared to Chambers’ 34,000.

Despite its best efforts to reduce euthanasia, the local shelter faces a perception problem. “People told us they wouldn’t use us because we’re a killing facility,” Sims said. “We are a public establishment and must take what is brought.”

While dogfighting is illegal in Alabama and Georgia, Sims knows it happens here.

“We have bulldogs coming in that are torn,” she said. “In some of our service areas it is illegal to own pit bulls.”

It’s illegal in Lanett, and there are restrictions in West Point.

“You can have them in the Valley, LaFayette and rural Chambers County,” Sims said.

In 2018, the Alabama Legislature enacted Emily’s Law, which established a uniform procedure for declaring a dog dangerous. It establishes a three-step procedure beginning with the filing of an affidavit, followed by an investigation and a court hearing.

Sims said a large percentage of dogs brought to the shelter are pit bulls or pit bull mixes.

As the shelter is under contract with the department and its main cities, they must take all the dogs and cats that are brought there. They must each keep seven days to allow time for an owner to come and claim it.

“We have a low recovery rate,” Sims said. “We need to find a way for pet owners to be more responsible.”

There’s a complicated route to follow when someone’s pet has been picked up and they want it back.

“They have to go to city hall and pay a release form,” Sims said. “The adoption fee is $100, but the animal has received all necessary vaccinations and has been dewormed. We are now losing $30 on all of our cat adoptions.”

According to Sims, responsible pet ownership is about keeping your pet for life and giving it humane treatment.

Sims said there are far worse options than a Humane Society animal shelter.

“If we had a county pound, you wouldn’t get the same services you get with a Humane Society shelter,” she said. “A pound will keep a dog or cat for seven days and put it to sleep.”

The local Humane Society fell on hard times when a plan to relocate the shelter didn’t work out. Sims said the new board is working to make the right decisions and earn the public’s trust.

“They want to do what’s best for the community,” Sims said.

Sims said she was an employee and not a board member. The decision to move the shelter, she said, was not hers.

“I’ve been accused of doing things that I didn’t do,” she said. “The former board members are good people. They just didn’t make the right decision.

She congratulated the new council for carrying out some necessary projects.

“We’re still at the same facility, but we’ve made some improvements,” she said. “The building has been repainted and we have a cat room where cats can run around and not be in cages. Another community chat room has been designed.

This will keep male cats and female cats separate.

Sims said everyone is at the shelter for the simple reason that they love animals and want them to be treated with love and humanity.

“I wish there was no need for what we’re doing,” she said. “If we didn’t take care of the problems we have every day, we could all have other jobs. This work must continue, and it must be done by people who see the beauty in all of God’s creations. We don’t do what we do for the salary we receive. We do it for the love of animals. People ask me why I work in a place where animals are euthanized. This puts me in a position to do whatever I can to stop him.