Innovative civic space has been described as a ‘statement of intent’ for the regeneration of Carlow town.

The exchange at the potato market was officially opened last Friday with the ambition to be a center for a range of social, cultural and educational events. Carlow County Council says the semi-covered outdoor space is open for use, despite the fact that ESB has not yet completed the connection work. Reservations at The Exchange are invited and a list of events taking place in the coming months will be announced in October.

Carlow Farmers’ Market have been set up as anchor tenants at The Exchange, with the group due to hold an open day in the coming weeks once connection work is complete.

A group of Ukrainians are also planning to have a special Ukrainian market of food and craft stalls, as well as music.

Speaking at the official opening, cathoirleach Brian O’Donoghue said: “The really exciting aspect of this project is that it demonstrates how a vacant site in the city center can be transformed into a vibrant public space for the community.

Cllr O’Donoghue said he looked forward to working with those present at the opening to bring The Exchange to life.

The swap complements the council’s master plan, Project Carlow 2040, which aims to regenerate the town, with improving the potato market being the centerpiece of that strategy. 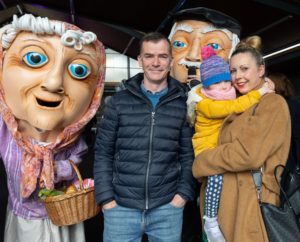 During the official opening of The Exchange at Potato Market. Carlow Mark, Caroline and Ailbhe Quinlan

Kathleen Holohan, chief executive of Carlow County Council, described the scheme as “a statement of intent” by the local authority to regenerate and transform the town centre.

Ms Holohan thanked all interested parties who had supported the development and looked forward to further improvements in the town thanks to the URDF funding that had been secured.

The timing of the official opening, when the building is not fully functional, has drawn significant comments on social media. It was planned, Cllr O’Donoghue said, in line with Culture Night and Ms Holohan’s retirement later this week, when that was also the convenient date for public officials, officials and guests.

Event bookings for The Exchange will be arranged through Carlow County Council’s Economic Development Department and interested users are encouraged to inquire with Pierce Kavanagh on [email protected] or by calling 059 9129783. 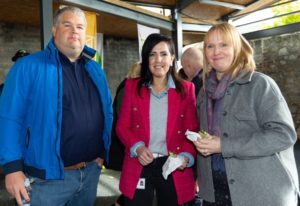