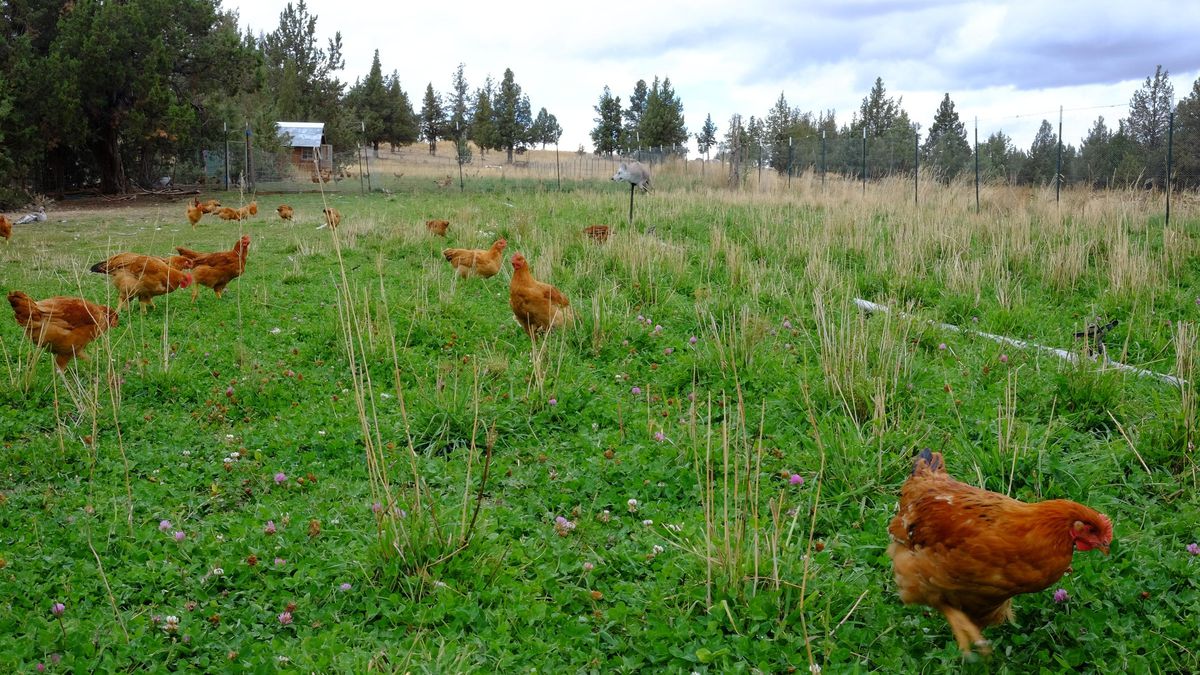 Farming is a family affair for Cameron Gunther. His parents were farmers and he now runs a small poultry farm, Home Farm Foods, with his mother in Culver, Oregon. Their 4,000 hens can produce up to 250 dozen eggs a day. That might sound like a lot, but Gunther says it doesn’t translate to a big cushion for unexpected issues.

“We don’t have these huge savings accounts that these big farms have,” Gunther said. He made the difficult choice to close access to his farm after a form of bird flu, which can kill wild birds and poultry, was discovered in the nearby town of Bend.

“If we went positive for the birds, I think we would sink,” Gunther said.

For Gunther, it was voluntary. Farms within 10 kilometers of the infected property fall under a quarantine zone, which covers most of Bend. Nearby poultry farmers outside this area can also take preventive measures.

The challenges Gunther and other poultry owners now face come after the Oregon Department of Agriculture issued a regional bird flu quarantine for Deschutes County this week. It was the fifth confirmed case in the state this year. Dr. Ryan Scholz, state veterinarian for the Oregon Department of Agriculture, says the strain of bird flu detected in Bend differs from a less severe strain typically found in Oregon.

But in the Pacific Northwest, the strain is rife. Washington has already had 28 cases detected in domestic herds.

The virus was found in a flock of about 70 birds in East Bend where owners were selling eggs to the public. Because the virus quickly kills poultry, the Ministry of Agriculture issues regional quarantines after detecting and euthanizing all birds exposed to the virus.

According to Scholz, during quarantine, the department conducts two rounds of monitoring 14 days apart.

“If we find any more cases in this control area, then this quarantine is extended and we have to start over.”

Gunther, whose farm is in Jefferson County some distance from mandatory quarantines near Bend, initially restricted access to the farm due to cases in Washington. He closed his farm completely to visitors as a precaution after the quarantine was announced on Tuesday.

“Anyone who doesn’t work for us immediately no longer has access to the farm,” Gunther said. “We completely shut it down.”

These quarantines weigh on poultry farmers, especially those like Gunther who rely on their birds’ access to the outdoors. Its facilities cannot currently handle a full quarantine – which requires isolating the birds indoors.

“If all these birds were to come inside and we had to lock down all the vents, all the fans, all the doors…the heat would just be too much,” Gunther said. “I would suggest or assume that we would probably lose 30-40% to heat stroke.”

These preventative measures also put financial pressure on farmers like Gunther, who said: “Even when you test positive for birds, aid is a joke.” While the USDA will provide compensation for euthanized poultry, cleaning and disposal of equipment, losses due to business interruption cannot be covered. Already, Gunther has felt the impact of his self-quarantine. Deliveries, usually made two to three times a week, are made only once. A full quarantine, he said, would be devastating for the farm and its staff.

“If we went into full lockdown, we would probably have to drop three of our five guys,” he said.

To prevent bird flu from spreading, Scholz said, “The most important thing is to make sure that wild waterfowl don’t come into contact with domestic birds.” Other preventative measures include cleaning equipment and clothing that comes into contact with other domestic and wild birds, as the virus spreads from bird-to-bird contact.

As summer progresses, the warmer weather should help dampen the virus. However, Scholz still encourages flock owners to beware of bird flu.

“I expect this virus to be back in the fall when the weather gets colder and the birds start flying again,” Scholz said. “So it will be very important for poultry owners to look carefully at their operations at this time and determine what they can implement to protect their own birds.”

If you suspect wild or domestic birds have avian influenza, contact the Oregon Department of Agriculture immediately. Symptoms include sudden death, swelling around the head, discoloration, coughing, sneezing, diarrhea, lack of energy and decreased appetite.