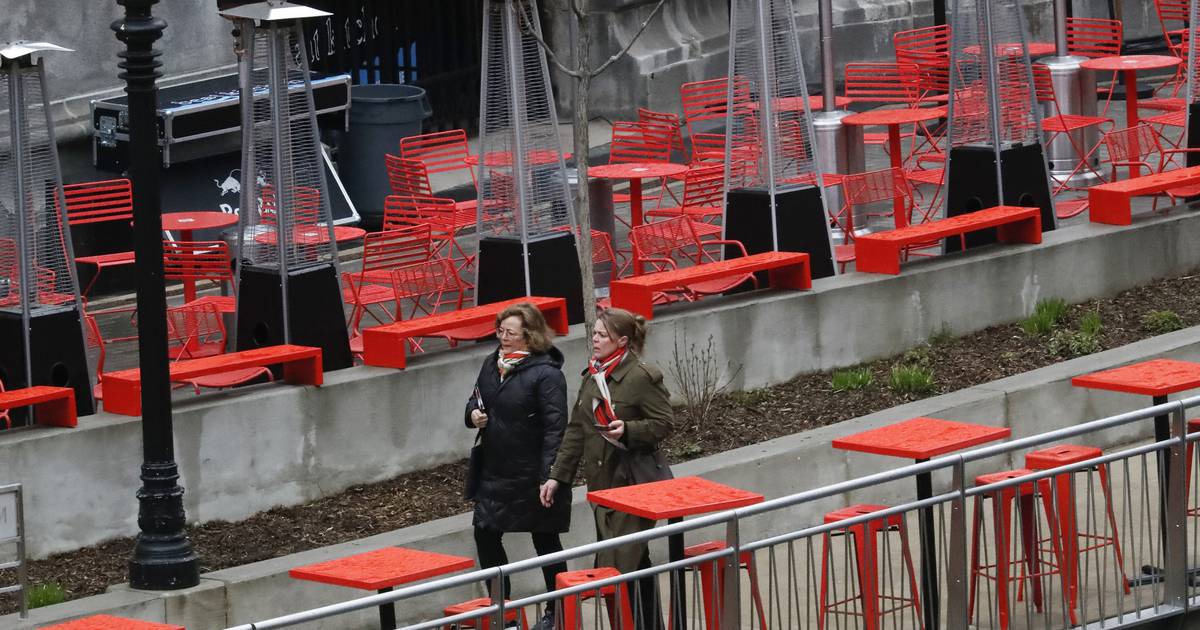 Chicago’s recent cold snap, with temperatures hovering in the 30s and 40s, has been a real pain for Greg Fischer, owner of the Wild Blossom Meadery & Winery in the south of the city.

His business, which relies in part on his outdoor social space for customers tasting his wine and mead, saw far fewer customers in early spring. And the bees he brought in from Florida to raise are struggling to adapt to low temperatures.

“I’m losing a few hives and their queens are looking at me like ‘Where did you take us from? Fischer joked. “We’re not going to go bankrupt, but it definitely jeopardizes my expansion plans,” Fischer told the Tribune on another cold, overcast day. “That’s a pretty big kick in the pants post COVID.”

Fischer, other outdoor business owners and those who rely on the fans who flock to Chicago’s two baseball fields have had a rough start to the spring. But many are confident warmer weather expected to move through the region later this week could save things as Chicago and the rest of the country pursue a return to normalcy after the two-year pandemic.

Despite continued unseasonably cold weather earlier this week, the National Weather Service predicted temperatures would hit the 60s on Thursday and near 80 degrees on Saturday.

The gloomy weather well below seasonal norms also slowed activity along the city’s Riverwalk. Ariella Gibson, marketing and communications manager for the Chicago Loop Alliance, said Monday that most Riverwalk establishments were closed due to colder temperatures.

Tracie Irvine, director of marketing and events for The Northman Beer & Cider Garden, said the beer garden’s planned opening last Friday was delayed due to weather. The Northman will attempt to reopen on Thursday, when temperatures are expected to peak in the mid-60s.

“Nobody wants to sit outside in the rain, in the cold, you know. Beer and cider or not,” Irvine said.

Last year, The Northman was able to open in early April. Construction on the Riverwalk was one factor in this year’s delay, but Irvine said she doesn’t think the restaurant could have opened anyway because of the cold, rainy weather.

“I think it’s frustrating for everyone, but that’s the nature of being outdoors. It’s just something we have to put up with with the beatings,” she said.

Freddy Fagenholz, general manager of legendary Cubs bar, Murphy’s Bleachers in Wrigleyville, had a similar sentiment, saying the cooler weather had undoubtedly reduced the use of his large outdoor patio popular on hot game days. The first night game of the season at Wrigley Field was due Monday night, with temperatures at or just below 40.

But Fagenholz said the start of the baseball season is often too cold for large crowds and that’s an expected work hazard. “It’s April, when it’s supposed to rain… and snow. It’s Chicago weather, so you take the good with the bad,” he said.

“Unfortunately it’s not in our hands. The crowds aren’t that big right now so I don’t think it makes that much of a difference. We’d like to have 65-70 degree weather right now, but it’s not,” Fagenholz said. “Weather affects (business), of course, but we still have seats inside and people can go inside, so we make the most of it.”

Beat Kitchen on the Riverwalk opened last Friday, owner Robert Gomez said, and business has been better than expected given the weather. Friday was the first day it was allowed to open by the city, Gomez said, and he thinks he would have regretted trying to open earlier.

“It’s been a miserable spring in Chicago,” Gomez said.